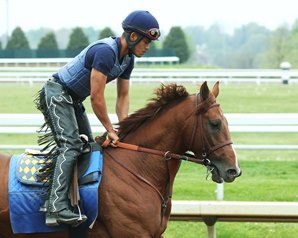 Collected’s win in the GII Californian Stakes was a thrill for the owners of Speedway Stable, Peter Fluor and KC Weiner, said Marette. Here’s what else she had to say about it:

“This handsome son of City Zip had some collective help along the way. First of all, thank you to Wayne and Cathy Sweezy who rehabilitated him at their Timber Town Stable and when he was ready to go back to the track Mal Maguire took over the reins and brought the horse to a different level with his “Cowboy dressage”. None of this could have been achieved without the collaboration of Bob Baffert who said not to send him back until he was well and truly ready.”

Here’s a fine report of the win in the Blood Horse:

The marathon that is the Keeneland September yearling
sale can be tough for both humans and horses.
For young horses, being shown all day to prospective
buyers in an unfamiliar location before stepping into the
loud auction ring can be nerve-wracking. That’s how a
particularly calm chestnut colt in Runnymede Farm’s 2014
consignment stood out to SGV Thoroughbreds’ Steven
Venosa.

“He was a horse that from the first show I looked at
him early in the morning (to when) I went back late in
the afternoon to look at him again—and you know how
it is at Keeneland, those horses show all day long—that
never turned a hair.

He just dropped his head and walked like a machine,” Venosa said of the City Zip— Helena Bay colt who he managed to buy for $150,000.

That horse is multiple graded stakes winner
Collected, who just picked up another graded stakes
score April 22 when he easily cleared the field by 3 3/4
lengths in the Californian Stakes (G2) at Santa Anita Park.
Although Venosa said he wasn’t a “typical 2-yearold
in training,” he thought highly of the colt when he
was breaking him and decided to pinhook the colt
to the 2015 Ocala Breeders’ Sales March 2-year-olds
in training sale, where he brought $170,000 from his
current owners Speedway Stable.

“Looking at him, he wasn’t your typical 2-year-old
in training… A lot of people passed over him because
he didn’t have the best breeze. He switched leads
a couple of times but he galloped out real strong,”
Venosa said of the colt’s furlong breeze in :10 2/5.
“When we were training him and breaking him, we
never found a bottom on that horse,” he added. “He
went out and really enjoyed training, just really enjoyed
it and loved his job.

“Some babies, when you’re breaking and training
them, they really don’t want to do what you want to do
at that point in time, but he was one that really enjoyed
being a horse. He was a pleasure to train.”

Under the guidance of trainer Bob Baffert, Collected
became graded stakes-placed at 2, a two-time grade
3 winner at 3, and is now two-for-two this year after an
11-month layoff. He was a 3 3/4-length winner in his first
race back, the April 1 Santana Mile where he bested
grade 1 winner Dortmund.

Venosa credits the trainer’s handling of the athletic
colt to his success in his 4-year-old season.
“(Baffert’s) credentials definitely speak for
themselves, and he has (Collected) right,” Venosa said.
“I think it’s going to be a nice, fun summer with him. I
think the best is yet to come.”