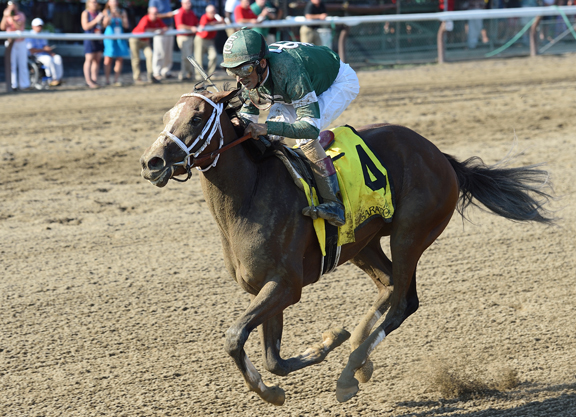 Sweet Loretta recently lifted the G3 Beaumont. Marette is delighted for the connections:

“Well done to Vinnie Viola racing with a smashing win with Sweet Loretta. This very talented filly was a G1 winner last year and by the looks of her impressive return in the G3 Beaumont, a repeat of that feat should be well within her grasp. Mount Brilliant Farm purchased her mother at the 2016 Keeneland November sale and we are breeding her to War Front. Exciting things ahead for all the connections.”

And here’s a great article about the win in the TDN:

“She’s been training very well lately, said Ginny DePasquale, assistant to Pletcher. “She hasn’t missed a beat, so we expected big things from her today. She stepped up to the plate today. We’re very happy.”

Sweet Loretta broke her maiden at first asking at Monmouth last June and shipped north to capture the GIII Schuylerville S. on Saratoga’s opening day in July. The filly capped off a fantastic summer by dead-heating Pretty City Dancer (Tapit) for the win in the GI Spinaway S. over seven furlongs Sept. 3.

Trained up to the GI Breeders’ Cup Juvenile Fillies following that effort, she encountered significant early trouble and faded to finish 11th, beaten 12 lengths by Champagne Room (Broken Vow). Sweet Loretta returned to the worktab in late February and trained steadily at Pletcher’s winter base at Palm Beach Downs.

Tabbed as the clear favorite for this cutback to a sprint distance, the $750,000 Keeneland November weanling purchase was allowed to settle off the pace in the early stages and quickly advanced to secure a spot stalking the pace along the rail behind a quarter-mile in :23.47. Holding her position in search of running room around the turn, she punched through a generous opening cornering for home and kicked clear to open up a decisive advantage by mistretch. Despite drifting out a bit late, Sweet Loretta reported home a clearly best winner. The previously unbeaten Sine Wave raced up close early and stayed on well down the lane to complete the exacta.

“I had a really good trip,” winning rider Javier Castellano said. “I was inside all the way and saved all the ground the best I could. Turning for home, the rail was open and I took my shot. She finished really well. I give all the credit to Mr. Pletcher for the way he trained the filly, coming off a layoff after the Breeders’ Cup.”

When asked about future plans for the filly, DePasquale said that Pletcher and owner Vincent Viola will discuss the best course of action.

Dancing Rags (Union Rags), winner of the GI Darley Alcibiades S. here last October, raced towards the back of the pack and never factored in a sixth-place finish. Like Sweet Loretta, it was her first start since a dull eighth-place finish in the Breeders’ Cup Juvenile Fillies.

“It’s a little disappointing,” trainer Graham Motion admitted. “They ran away from her early on, which I expected, but I am surprised she didn’t run on a little bit at the end. Angel Cruz did exactly what I asked him to do, which was not to rush her. She will stretch out and go two turns next time.”

The winner is the first foal out of a half to Canadian champion and GISW Spring in the Air (Spring At Last). Second dam Unbridled Run (Unbridled) is a half to MGSW Tejano Run (Tejano), who was second in the 1995 GI Kentucky Derby. Sweet Loretta has a juvenile full-brother who sold for $450,000 as a KEESEP yearling and a half-sister of 2016 by Street Sense. Ithinkisawapudycat was bought by Mount Brilliant Farm for $2.2 million in foal to Constitution at last term’s Keeneland November sale. She is also responsible for a 2015 colt by Tapit and a 2016 filly by Street Sense.