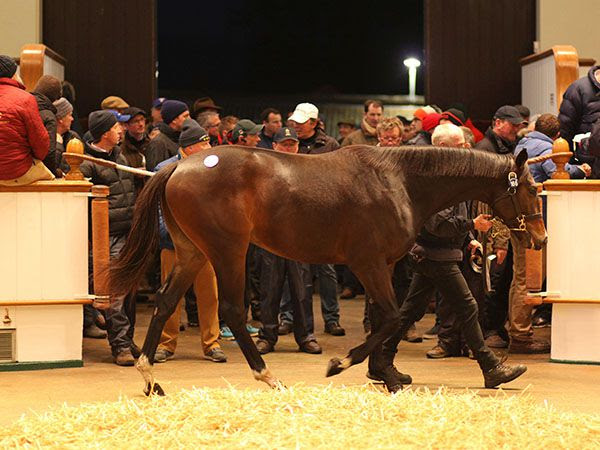 The lovely picture attached is of Mount Brilliant Farm’s Frankel colt that recently sold at the Tattersalls sales.

The following is from a TDN article about recent winner, Ricky’s Girl, who is owned by Rick Kanter. Says Marette: “fantastic training job by Mike Stidham and Hilary Pridham.”

The following is from a Blood Horse article about a nice winner for trainer Mike Stidham over the weekend:

“Stallionaire Enterprises’ Mike Stidham-trained Bobby the Brain may have been “the other Stidham” in his debut Dec. 3 at Fair Grounds Race Course & Slots, but it seems no one told him.

While stablemate Brookline, also starting for the first time, came into the race with notabke pedigree distinction as a Tapit half brother to champion Bernardini , 2-year-old Bobby the Brain caught a flier under jockey Mitchell Murrill and never looked back, while Godolphin’s Brookline was off slow and finished fifth.

Setting fractions of :24.16, :47.63, and 1:12.18 in the mile and 70-yard dirt test, for which he wore blinkers, Bobby the Brain had more to give turning for home. He kicked clear to a 2 1/2-length score to bring Stidham his 100th win of the year. Blueridge Traveler and Patriot Drive completed the triefecta, while 6-5 choice Teletap finished fourth in the eight-horse field. The final time was 1:44.09 on a fast main track.

Bred in Kentucky by Jamm, Ltd., Bobby the Brain is by Pioneerof the Nile , out of the multiple stakes-placed Pulpit mare Seasoned. His half brother, multiple stakes winner Diamond Bachelor, ran second by half a length Saturday in the Claiming Crown Jewel Stakes at Gulfstream Park. Seasoned, who has produced five foals, delivered an Arch colt in 2015 and a Union Rags filly this year.”

Marette also has news on two recent winners for Speedway Stables: “They are two for two! Acapella for Mike Stidham and Shayjolie for Cristophe Clement, both won their allowance races. Well done to all connections!”