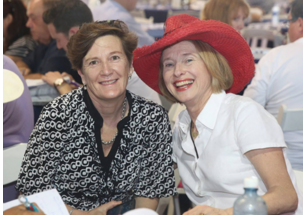 News on an exciting Aussie winner for Speedway Stables.

“Very exciting times for Speedway Stable. She is going to run in the Magic Millions race mid January on the Gold Coast. YEAH! This is Speedway Stables first runner and first winner on another continent. So special to do it with Gai and Adrian.”

The following was originally in ANZ Bloodstock News.

American owners Speedway
Stables LLC enjoyed their first
success in Australia yesterday
after the Gai Waterhouse and
Adrian Bott-trained Debonairly (Snitzel) made
an impressive winning debut over 1000 metres
at Warwick Farm, beating Te Amo (Not A Single
Doubt) by a decisive four and a quarter lengths.

The two-year-old was purchased for
$320,000 at the Magic Millions Gold Coast
Yearling sale from the Milburn Creek Wildes
Meadow draft by American-based agent
Marette Farrell and Gai Waterhouse for owners
Peter Fluor and Kane Weiner, who race horses
in partnership under the banner Speedway.
Fluor is the chief executive officer and
chairman of the Houston-based Texas Crude
Energy. His father also owned racehorses and
was a part-owner in dual Prix de l’Arc de Triomphe
(Gr 1, 2400m) winner Alleged (Hoist The Flag) in
the 1970’s with the late Robert Sangster.
Fluor and Weiner are business partners and
followed their fathers, who themselves were in
business together, into racehorse ownership.
This decision came after after a chance trip to
Saratoga after which Fluor said to Weiner that
should get back into owning horses.
Speedway Stables have only owned horses
in America since 2014, but have enjoyed
success in a relatively short space of time since
joining the owning ranks, winning three Grade
One races, two last year with the Christophe
Clement-trained Hard Not To Like (Hard Spun)
and more recently this season with the Bob
Baffert-trained Noted And Quoted (The Factor),
all bought through Farrell.
“It was their first runner and winner in
Australia for Speedway. I buy for them in America
and I used to work for Gai and she spoke to me
about maybe coming back down and getting
people involved in Australian racing,” Farrell told
ANZ Bloodstock News yesterday.

“So there really was no other reason, other
than that I suggested to them they own one in
Australia, I felt it would be a fun thing for them to
do and I thought they would love Gai and enjoy
the whole spectacle of racing in Australia.”
Debonairly, a daughter of the Arrowfield
Stud sire Snitzel (Redoute’s Choice) beat the
Peter Robl-trained Te Amo, who was sent off
$2 favourite, with the same distance back to
Membership (All American) in third.
After the win Waterhouse and Bott’s racing
manager Emma Pearce said: “She’s got Gold
Coast filly stamped all over her. Just the way
she jumped, went to the front and didn’t get
caught. I’d like to see that early January.”
Farrell told ANZ Bloodstock News yesterday
that the Magic Millions 2YO Classic (RL,
1200m) would certainly be a possible target
after being impressed with the win.
“It was unreal, she just did it so easily. I
would imagine the Magic Millions would be the
next step, it seems like the best option for her
certainly after today.”

The Kentucky-based Farrell, who spent
some time with Waterhouse in the early part
of her career, came to the Magic Millions Gold
Coast Yearling Sale with Pearce to find the right
horse for the owners and she said she took to
Debonairly from the beginning.
“There was just something about that filly
that I really liked. I liked her demeanor, I loved
her balance. But also the fact that she was by
Snitzel and knew he was a fantastic sire and I
loved her female family and that she was out
of Singspiel mare and her second dam was by
Kris,” Farrell explained.

“But it was important to me buying for
people for the first time in Australia that the
horse looked precocious but also something
that would go on develop as three-year-old,
with a option of racing her back in America
as an older horse. That’s the first thing Peter
[Fluor] asked me when we discussed buying a
horse in Australia.”
After speaking to the delighted owners
after the win, Farrell said they have now planned
a trip to Australia to watch the filly contest her
next race.

“The owners were over the moon. When I
woke up this morning, there were about eight
emails waiting for me. K C [Weiner] had looked
up the race he had got the video and he was
sending all the information out to everyone
involved. It’s very, very excited because it’s just
a whole other frontier for them. They are already
planning on coming down for her next race, so
that great.”
Waterhouse and Bott prepared another
winner at Warwick Farm yesterday three-yearold
filly My True Love (Fastnet Rock) ran out
a ready winner of a Benchmark 67 (1300m),
beating the Peter Robl-trained Sugarparma
(Snitzel) by one and three quarter lengths.
My True Love, who was bought for $250,000
by Gai Waterhouse at the Inglis Australian
Easter Yearling Sale from the Amarina Farm
draft, was coming here off the back of an easy
victory over 1300 metres at Warwick Farm in
November, having been beaten into third first
up over 1200 metres.

“I wasn’t too pleased with how I rode this
filly first-up in a race so I’m glad that I’ve been
able to get back on her today and win for the
connections,” said winning jockey Joshua Parr.
“I think if she keeps improving like this
there’s nice things in store for her.”