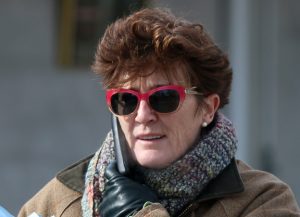 Marette Farrell purchase Romantic Babe was a superb winner on her debut at Saratoga yesterday. Here’s what Marette has to say about it:

“This is what owner Ali Fyfe looked like after his first time starter Romantic Babe trained by David Donk crushed a deep field in a MSW on the turf at Saratoga.

I think I now understand the term “gratification.” It was such a thrill to beat an exciting field like this with a $17k purchase from the Fasig Tipton Saratoga sale. Who doesn’t love to beat the odds!! I could not be happier for Scotsman Ali Fyfe and all his friends ( his phone was ringing off the hook in the winners circle). This fun loving group sit at the same table every year in the Carousel and dress up Saratoga style each and every day. They are the embodiment of true blue lovers of the racetrack and their spirited celebrations have an amazing ripple effect on all those around them. The champagne was flowing and there was a line of people coming to the table to congratulate them. I laughingly thought it was like trying to get an audience with the Pope!! Long may their success continue with this exciting Girolamo filly.

We are now two for two with our two year olds in Saratoga and both won impressively on the grass. This caps off a stellar week for our team of Tescha Von Bluecher and Zoe Cadman what with 2 yr old colt Supreme Aura’s very impressive victory in his first start at Delaware for trainer Mike Stidham. Thank’s to all the people involved. I love this – long may it last!”